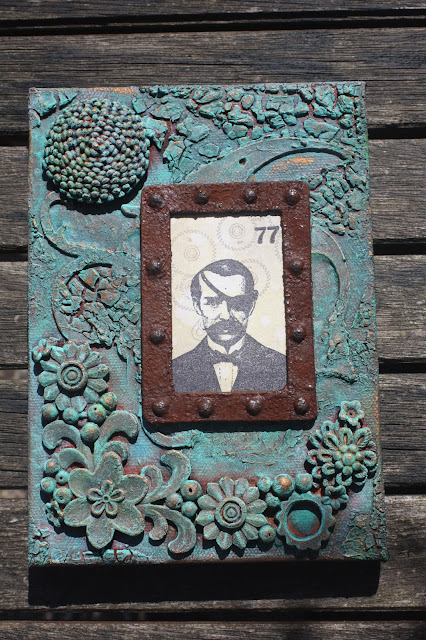 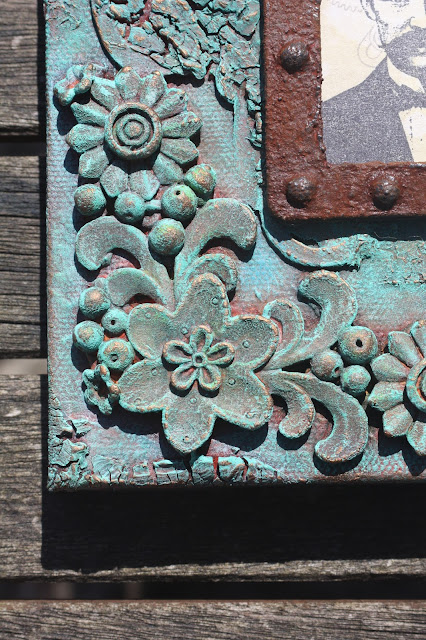 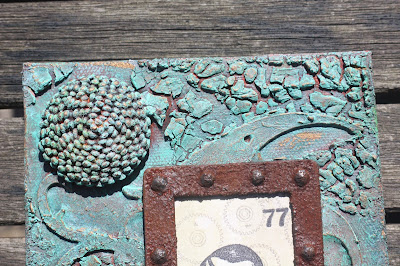 Stamps Used:
The Chap is from Mannen 1
The cogs are from Nuts and Bolts
Original Rust

Hi all and welcome, A special post for me today, Mark I have been doing the happy dance this week as I was lucky enough along with some of the other De Stempelwinkel Design Team to have a couple of pieces published in the current Just Steampunk magazine (Jetske is selling the mag here). I am over the moon as this was the first time I have submitted to a mag and was amazed to have been selected.
This is one of the pieces I made. It''s an 8''x10'' canvas. Now this was meant to have been a Finnabair inspired piece with a photo but somehow turned into this.
I started by adding all the embellishments to the canvas, there are some die cut pieces cut from some thick card, some Studio 490 buttons and a load of beads, these have all been attached with Pinflare glue.I added some Crocco Crackle and let it do it's thing.The whole thing was given a coat of Gesso. As  I said I was going for a Finnabair style canvas so started with a by giving it a base coat of Decoart white acrylic paint (all the paints I have used are from Decoart). I then started by adding some bright yellow and red and this is where it kind of went wrong. I could not get the look I was after for a Finnabair piece so decided to add more of the red mixing it with the yellow as I went along.
I decided to add colours that would give more of a patina finsh. I used more of a heavy dry brushing technique to apply the colours, this allowed the brighter reds and oranges to show through underneath.
I added white to the patina colours as I went along and lightened up on the dry brushing and help pick out the high points.
I finished off by giving a light rub of Decoart's new Metalic Lusters using their gold.
The rusty frame was made from an ATC cut from the Tim Holtz die, I cut two, I used one and stamped the image of the chap, masked him off and stamped the cogs in the background, I also added the number 77.
I used Distress inks to colour the ATC and give it a more aged look.
I cut the middle out of the second ATC and added some half pearls to act as rivets. the whole thing was covered with Decoart's texture paste and painted with acrylic paint, I then rubbed in some Original Rust to help bring out the texture and give a nice rusty look.
It was finished of by giving it a light rub with a graphite pencil.
The frame was stuck to the canvas using Pinflare glue.

Again thank you for stopping by it really does mean a lot.
stop back tomorrow to see what else our DT have been creating. xx

I think your Finnabair-esque design is fabulous, so much texture, such beautiful colours - an amazing canvas Mark and congratulations again on being published (deservedly so)! Anne x

This is a realy great piece of art-work, nice job Mark.

What a stunning timeworn creation and congrats for beeing published. Glad to know now, where i can get that magazin. (:o)

Congratulations on being published! It's gorgeous, so richly decorated, I can keep looking at it without getting bored!

What a amazing Canvas Mark. Congratulations on deing publised.

Fab piece! I can definitely see the Finnabar influence on your piece!

Amazing paint effects, as well as that fabulous rust. I love the studded frame, and the brilliant Finnabair-style embellishing - just wonderful!
Alison x

WOWWWWWWWWWWWW this is Great Mark.
Love it.
Greetings Janny

thank you everyone xx